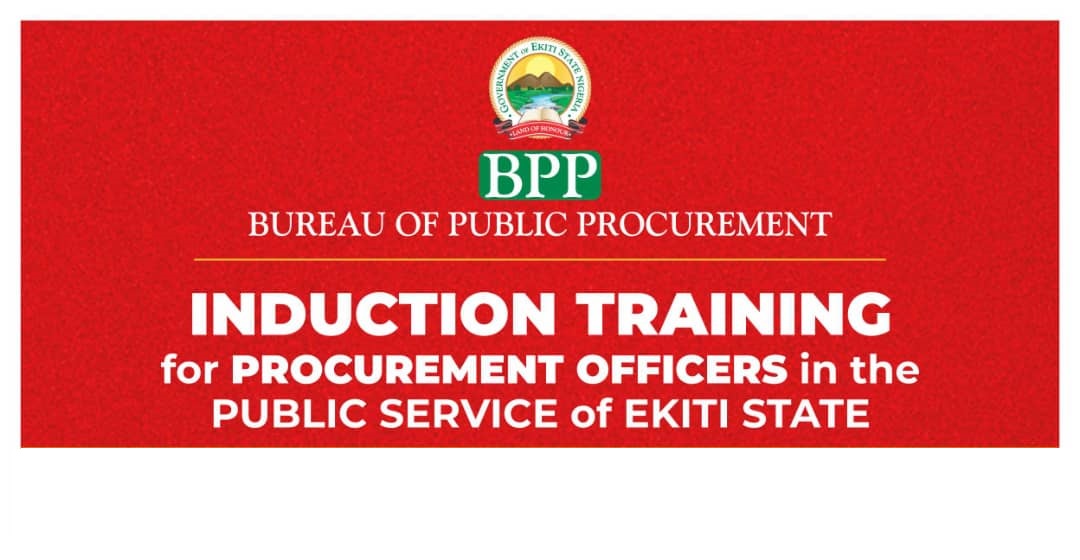 As part of efforts to further reposition Ekiti State Bureau of Public Procurement for upgraded procurement practice and effective service delivery, the Bureau organised a one-day induction training session for Procurement Officers in the public service.

Speaking further, Odewale informed that Ekiti State Public Procurement Law No. 2 of 2010 has been updated and harmonised with the various amendments to accommodate the necessary ingredients that would be beneficial to the State and all stakeholders, especially the good people of Ekiti State. He noted that the need for an updated version of law was further predicated on standard practice to review legal instruments after every ten years in operation.

Describing the new law as unique in its presentation as it covers the totality of procurement processes in the State and the Local Government, as well as the three arms of Government i.e. the Executive, the Legislature and the Judiciary, Odewale maintained that training and re-training of officers would be given top priority along side other measures such as enforcement of law/regulations, service delivery and orientation among others to achieve the lofty objectives of the Bureau.

In his goodwill message at the training session, the Chairman, Ekiti State Local Government Service Commission, Hon.Alaba Abejide who was represented by the Permanent Secretary of the Commission, Mr. Adeyemi Owoseni lauded the pragmatic approach and the giant strides of the Director General, Mr. O’Seun Odewale towards achieving success in procurement process.

Citing the ongoing Public Procurement Reform Programs such as the establishment of Procurement Officers cadre in Ekiti State Public Service as a progress marker, the Chairman stressed that the present administration under the leadership of Dr. Kayode Fayemi places a high premium on accountability and transparency in the procurement process in the Public Service of Ekiti State.

“It is necessary to stress that the present administration under the leadership of our dynamic and purposeful Governor-Dr. Kayode Fayemi places a high premium on accountability and transparency in Government business in the State by supporting the Bureau of Public Procurement as a regulatory body to carry out functions relating to procurement activities in all the MDAs and government institutions in the State. The vision of the Bureau is to ensure that government gets value for money in all its procurement by following ethical practices such as openness, probity and accountability” he said.

EOI: INVITATION TO TENDER FOR CONSTRUCTION/REHABILITATION OF ROADS